The sun pouring down and the endlessly high blue sky; I believe there are many people who are shocked by the beauty of the sky when they go and stand beneath it on Amami Oshima. However, it is beautiful not only during the day. It is after the sun sinks into the sea, the light dims and the sky creates a red gradation.

Stars begin to twinkle in the sky.

Time, season, and location― the night sky that changes expression in every moment makes this beauty stand out as you gaze at it.

We have asked Masahiro Araki, the “Milky Way Hunter” who chases the stars of Amami Oshima, to report in a total of 6 articles on the appeal of the stunning starry sky that can never be seen in a city.

The first article is about Kasari (Amami City).  Recently made ‘new spots’ are perfect for chasing the starry sky.

These are easily accessible for first-timers as well, so please visit!

Cape Ayamaru Park Tourism Info. Office lawn area—A spot where you can enjoy both the setting moon and the rising sun 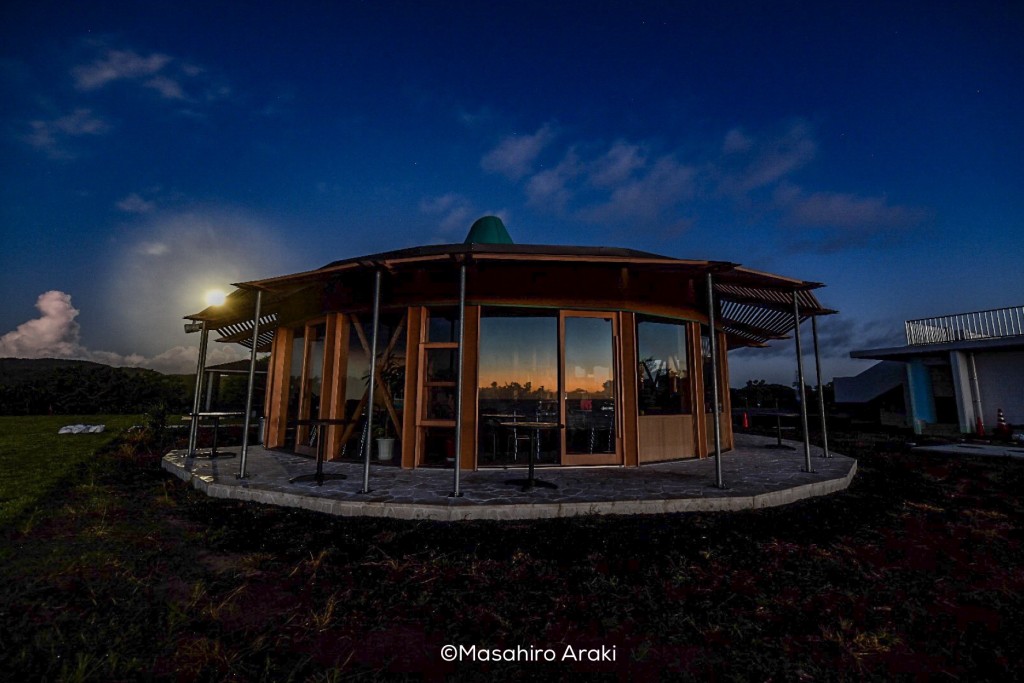 It is about 10 minutes away from the airport by car.  Cape Ayamaru, located in the northeast area of Amami Oshima, is a viewing spot that overlooks the open sea.  It is on high ground, so it becomes an ideal location for observing the starry sky at night.

Here is a map

It is much closer to the airport than Naze.

During the full moon, when the moon is beginning to set, the sun that will replace it is full of anticipation and dyes the sky red.  Yes, this is a special place where you can enjoy the transition into the sky-blue color that the rising sun paints the sky while watching the sinking moon.  You can truly feel the time dramatically change in just an hour. 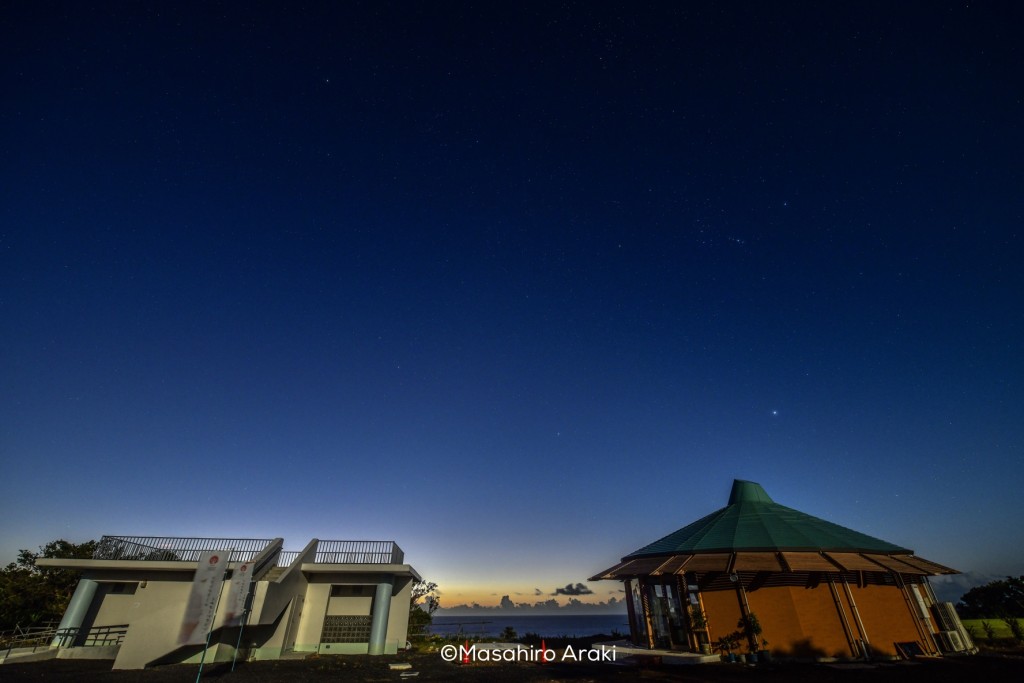 On the way to the Tourism Information Office (pictured on the right) from the parking lot, on the left-hand side there is a restroom, where there is a starry sky watching stage on the 2nd floor.

At the end of August, the representative winter constellation Orion rises from the eastern skies at dawn.  In this picture, above the Tourism Information Office is a first magnitude star. This is Sirius, the first magnitude star that shines the brightest. Above that is the Orion constellation.  To the left, essentially center, is Procyon, which forms a triangle called the ‘Winter Triangle’ with Betelgeuse and Sirius.  A photo taken beneath the full moon cannot capture the Milky Way that flows by Orion, but without the moonlight, the Milky Way appears.

The 360-degree, wide-open view of the starry sky from the stage on the 2nd floor, that you can look up at if you lay down, is the best spot for watching falling stars. I recommend a time when there is no moonlight.  It is even better at the time when the Milky Way crosses the zenith in a large arch. 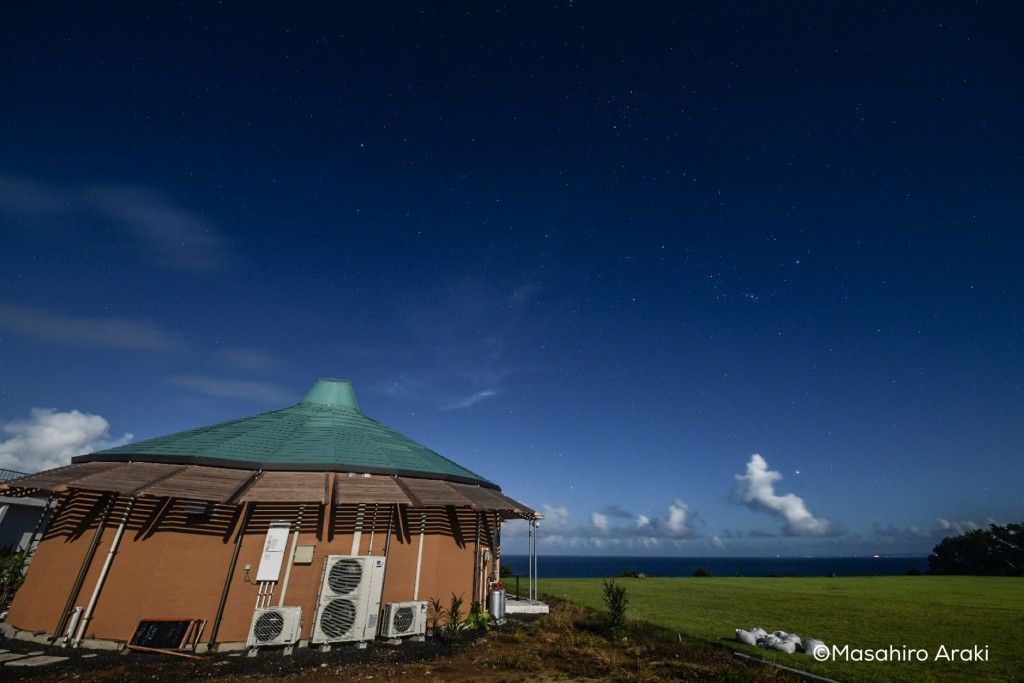 There is a large lawn next to the Tourism Information Office, and the view is also amazing from here.  This photo is when the ‘Winter Diamonds’ had risen. It appears in the eastern sky at about 1:30 on September 29th.

You can see these ‘Winter Diamonds’ up until about mid-April. 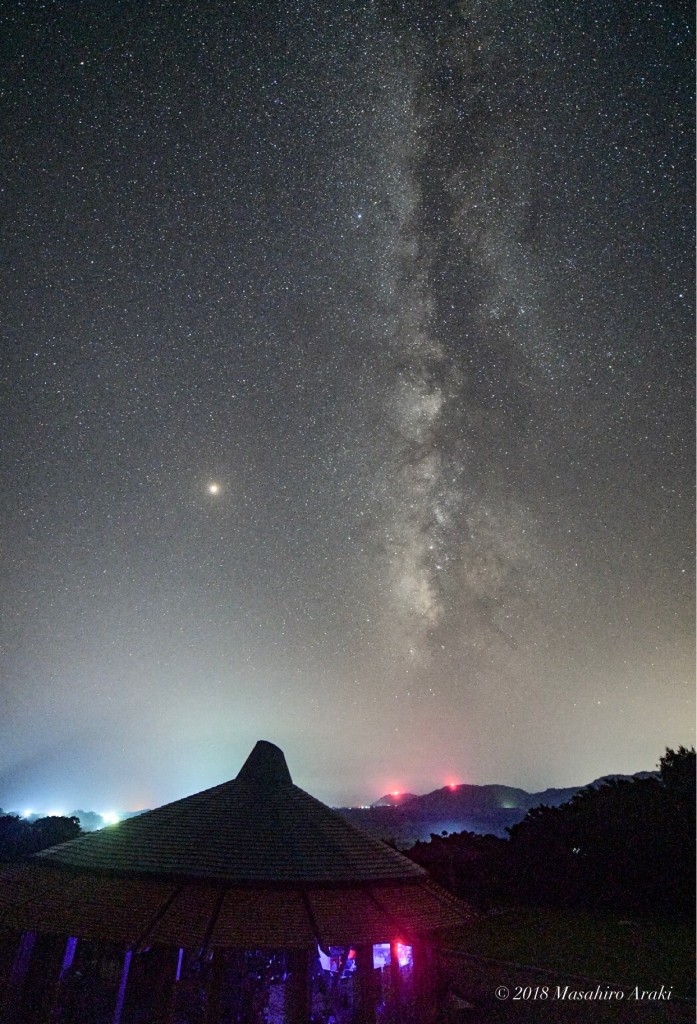 When I looked at the neighboring Tourism Information Office from this stage, I could see the rising Milky Way. The Milky Way seen rising almost vertically passes straight through the zenith to the north. In other words, I was directly below this arch of stunning stars.

At this time, we come to notice the Tanabata star and the Summer Triangle. After taking this photo I rolled up my parka into a pillow and when I laid down to watch the starry sky, I saw 2 shooting stars in succession that left long traces of their light.  Before I knew it, I had slept comfortably for about an hour after this.  Don’t forget to bring something to prop up your head when you go to enjoy the starry sky!

The season to see the Milky Way that forms an arch like this is from mid-May to early October.  The star shining brightly is Mars.  At the end of September, Mars remains in about the same position and still shines brightly, so the best time to see it continues till then.  If you stand here on September 29th at around 8 pm when there is no moonlight, you can encounter the same starry sky as the one pictured here.

Not only the sun, but also the stars and constellations rise from the east—Cape Ayamaru Park Observation Deck 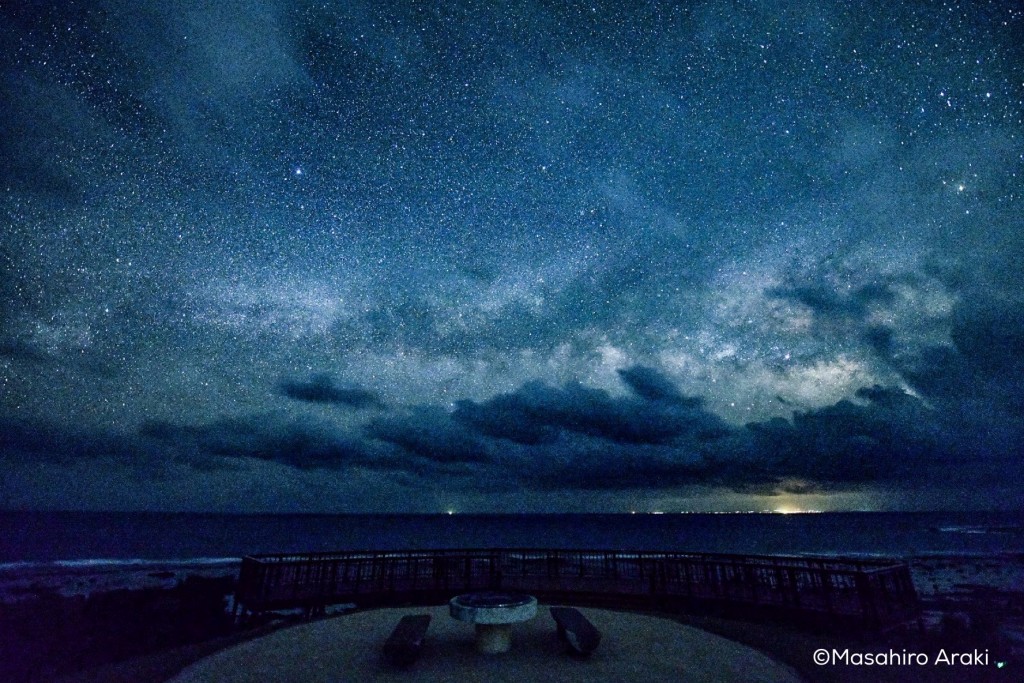 When it rises this high you can identify Scorpio on the right, Cygnus on the left, then across the Milky Way the ‘Orihime’ of the Tanabata star (Vega of the constellation Lyra) and ‘Hikoboshi’ (Altair of the constellation Aquila).  This is known as the ‘Summer Triangle.’ On the right of the horizon is the town lights of Kikaijima. 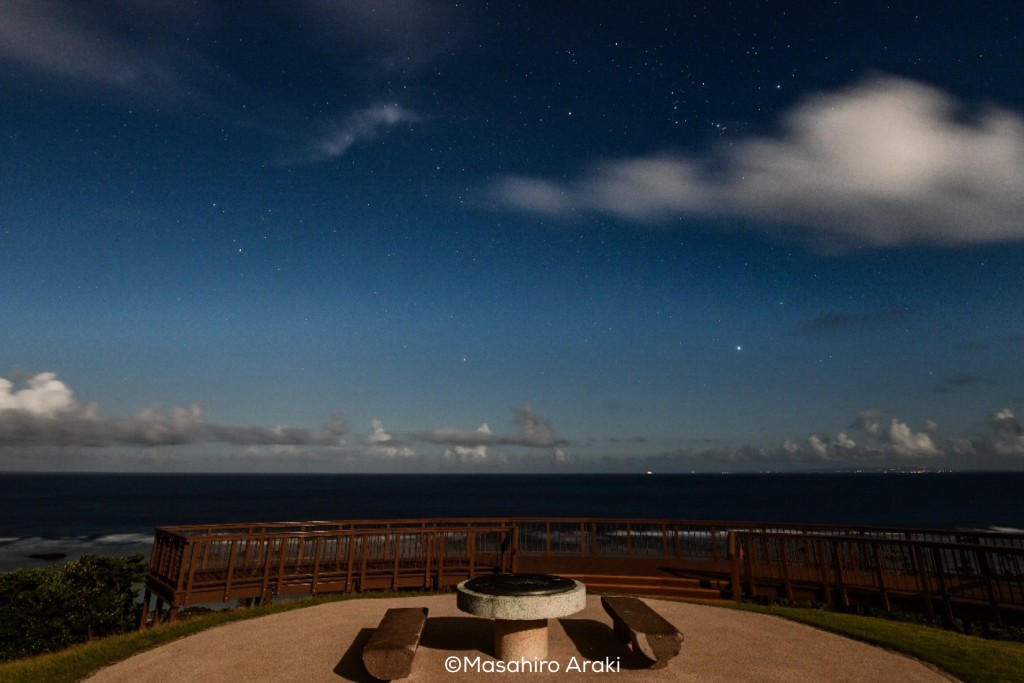 Late at night (around 2 am) on September 30th, Orion, Gemini, Canis Major and Canis Minor all appear just as in this picture. Betelgeuse, Sirius and Procyon of the ‘Winter Triangle’ rise from the ocean.  If you want to see these constellations, this is the place!

This place is just below the aforementioned observation area.  There is also a restroom here by the entrance.  When you park your car in this spacious parking lot, turn off the engine to make it completely dark.  If you leave the engine on, the monitor for the GPS navigation system is too bright.  At times when it is so hot you need to use the air conditioner, it would be best to cover the screen with a black cloth or something of the like.

They say that it takes about 20 minutes for the human eye to adjust to darkness.  If you continue to stare at the sky for 20 minutes, then you will come to see an incredible number of stars.  It is completely different from what can be seen by someone looking at their phone or someone who hasn’t been looking at it for 20 minutes. 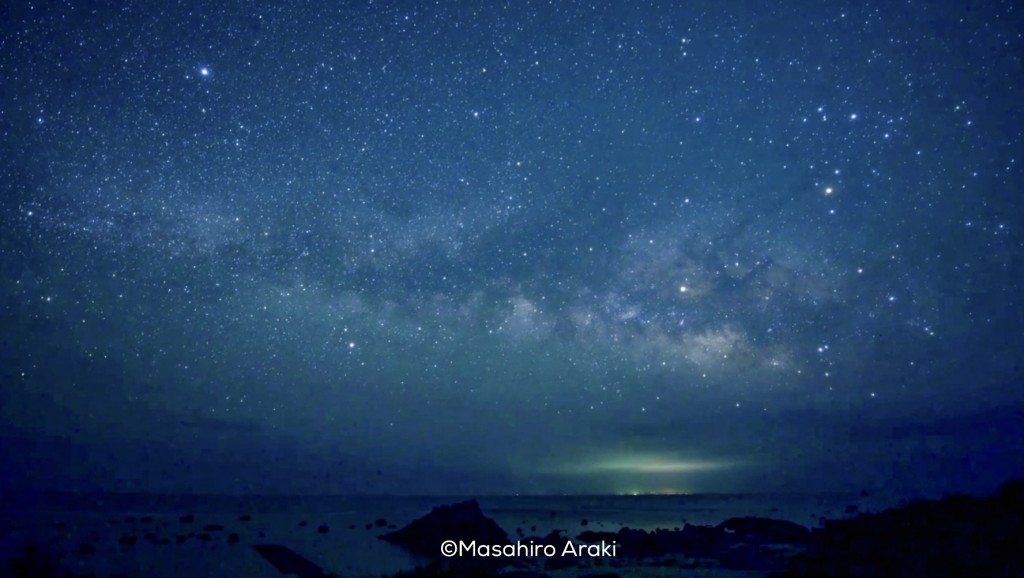 If you look out from in front of the tide pool then you can really feel the Milky Way that rises from the surface of the ocean.  At this time the summer constellations (from the right: Scorpio, Sagittarius, the Milk Dipper, Aquila, Lyra, and Cygnus) are clear and easily viewable.

This spot is perfect for viewing the majestic Altair (Aquila), Vega (Lyra) and Deneb (Cygnus) stars of the Summer Triangle that line up on the side.  This is certainly the Galactic Railroad!

Gaze upon the Andromeda Galaxy with the naked eye!  Kasarizaki Lighthouse and the ‘dream-fulfilling sea turtle’

Let’s move on from Cape Ayamaru.

It is in the same Kasari area, but on the northernmost edge of Amami Oshima there is the Kasarizaki Lighthouse. （MAP)

There is a park before you get to the lighthouse, where there is a ‘dream-fulfilling sea turtle,’ and there is also a restroom.  Here as well the ocean is right in front of you.  There are no homes in the surrounding area so the only light source is the glow of the lighthouse. 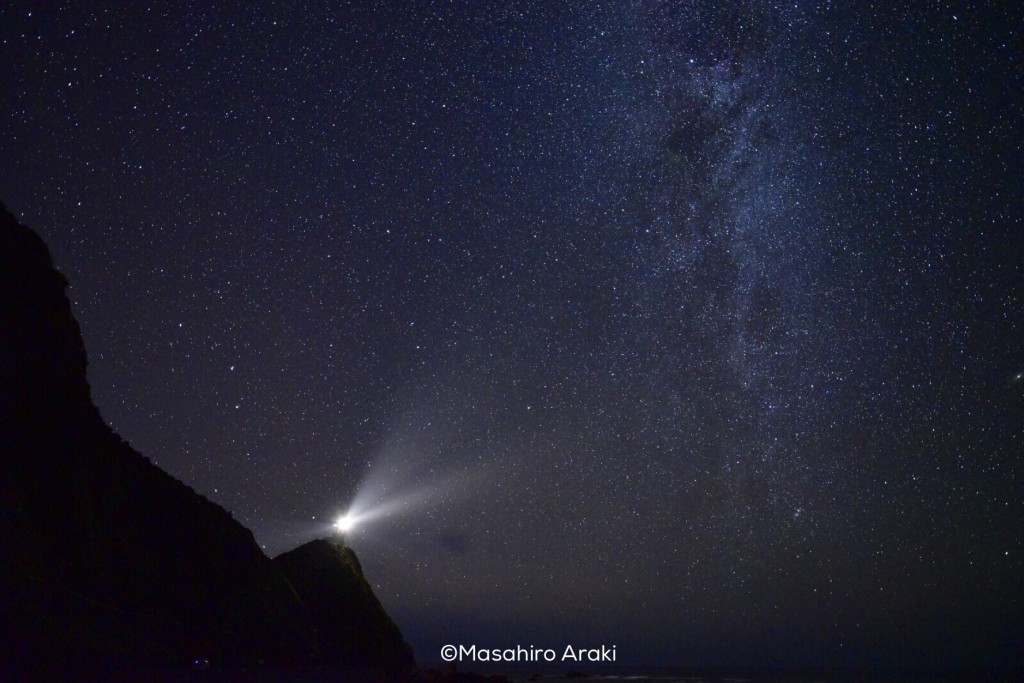 If you look towards the lighthouse from the park, the Big Dipper first catches your eye, then the North Star (Polaris), and Cassiopeia.  It is slightly difficult to find Cassiopeia, which blends into the strikingly dark Milky Way.

You can also see the Andromeda Galaxy with your naked eye!! 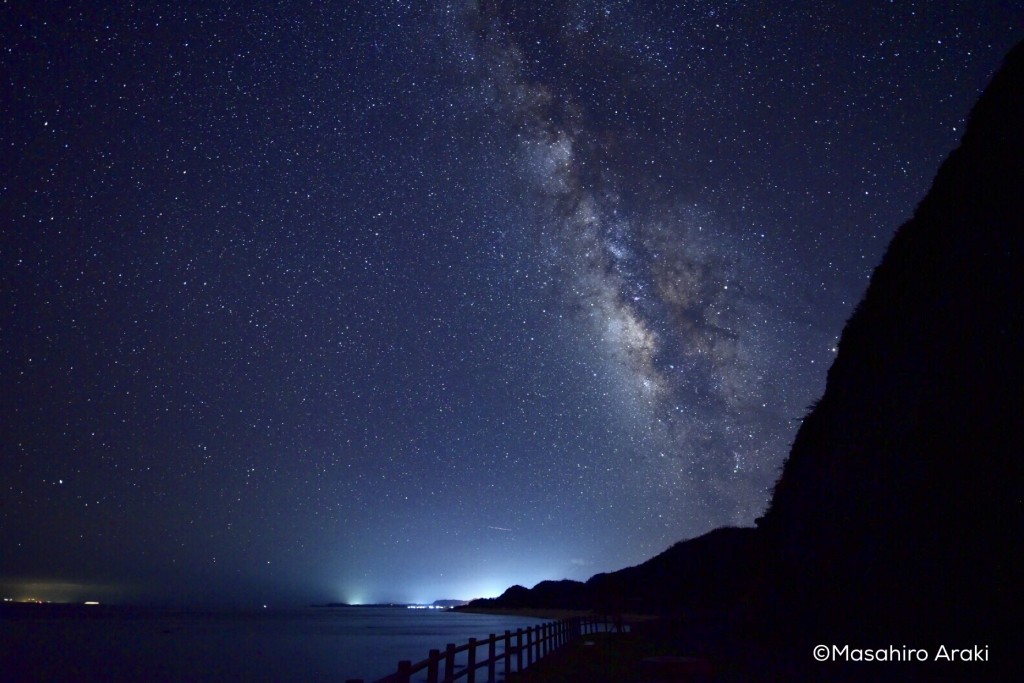 If you face towards the south, mountains protrude from the southwest so your visual field is limited, but the Milky Way is very clear.  On the left you can see the lights from Kikaijima.  The sound of the waves is loud, possibly because of the precipice in the background.  It is ideal for those who want to experience secluded areas. 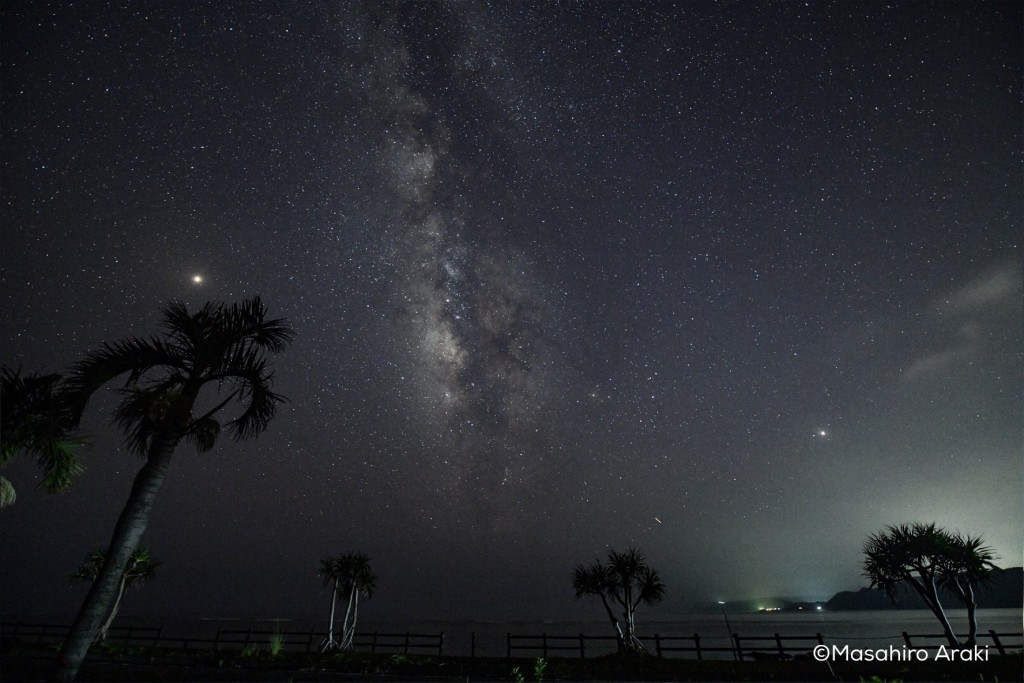 The next place we’ve arrived at is ‘Kaminoko village,’ in the northeastern region of the Kasari area. （MAP)

It faces towards the south, so it is a spot where you can see the summer Milky Way quite well.  It is a village that you pass through while on the way to Naze from the airport.

In front of Yoan village there is a parking lot lined by palm trees.  The area is dark and there is a flower bed separating the roads, so please watch your step.  There is slightly more traffic here, so take care not to look directly at the car headlights.  It is also close to Naze so it is a nice place for a brief look.

A hexagon formed by Sirius of Canis Major, Rigel of Orion, Aldebaran of Taurus, Capella of Auriga, Pollux of Gemini, and Procyon of Canis Minor.

A triangle formed by Altair of Aquila, Vega of Lyra, and Deneb of Cygnus. 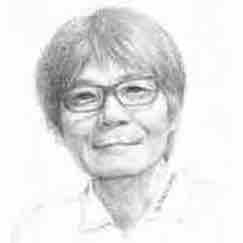 Digital contents creator, avid lover of Amami’s nature.  Dubbed with the unconventional name ‘the Milky Way Hunter,’ he continually photographs the Milky Way.  He is the author of the iBooks series ‘Let’s go see the Milky Way!’ (‘Amanogawa mi ni ikotto!’).  In addition, the healing nature sound album of the sounds of ocean waves of Amami and the bird songs that have been recorded as they heal him has appeared on the high res world chart.  He also indeterminately holds ‘The Milky Way Hunter Talk Events’ and ‘Starry Sky Photography Workshops.’ 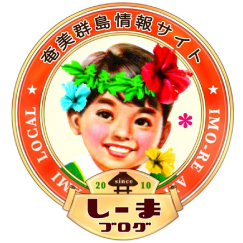