What is the Best Season for Visiting Amami? Let’s Ask an Expert!

Surely there are people who have visited Amami with an image of tropical southern islands, but were unexpectedly met with seemingly never-ending cloudy skies.

There are also probably many people who have been told that “the ocean is even prettier when it is sunny” by Amami islanders. 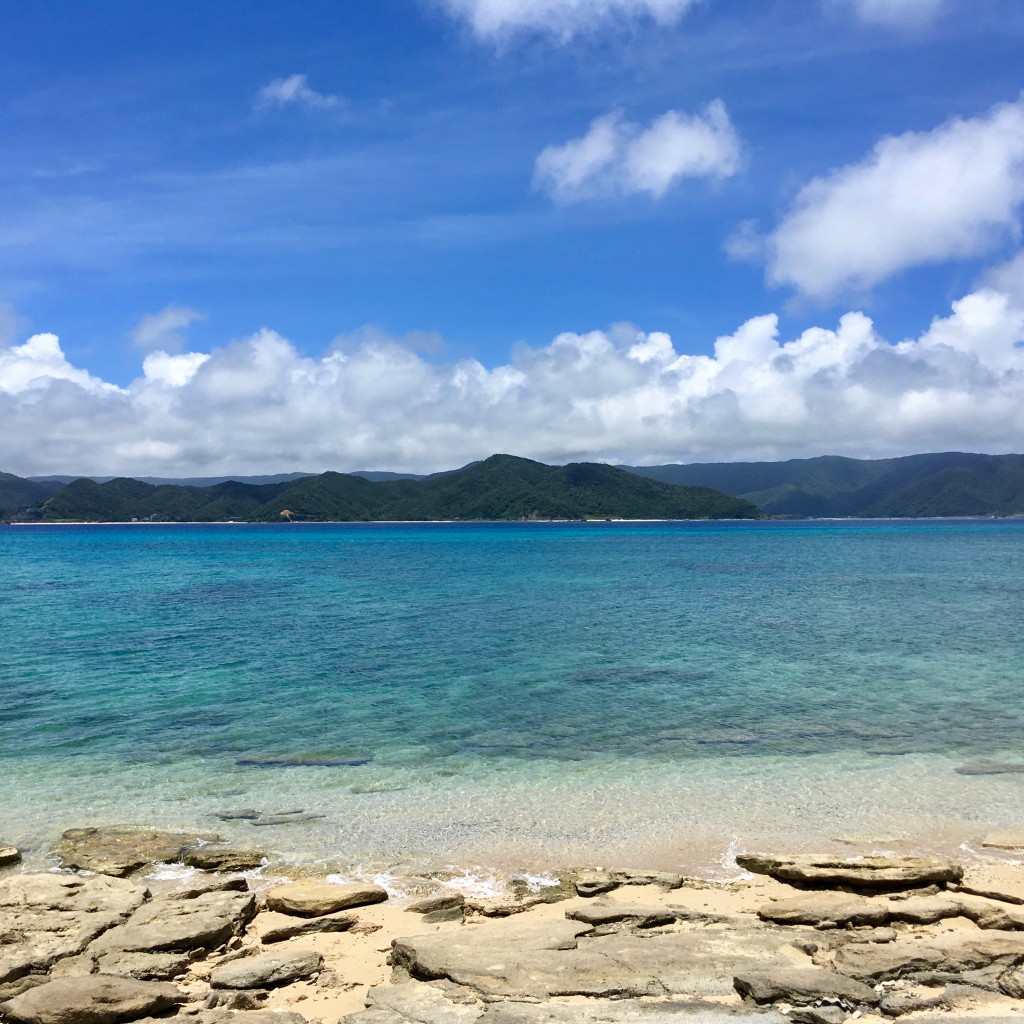 The ocean shines a deep blue hue when it is sunny.

In Japan, Amami Oshima and the islands further south are categorized as ‘subtropical.’

Even within that, Amami has its own special weather patterns and seasonal changes.

In light of this, it is essential that one is familiar with the seasons and weather of Amami in order to more fully enjoy it.

When it comes to the weather, the Japanese Meteorological Agency is the place to go for information. I visited an associated agency called the Naze Weather Measurement Station, and the person who kindly answered my inquiries was forecaster Yasuo Sasaki. 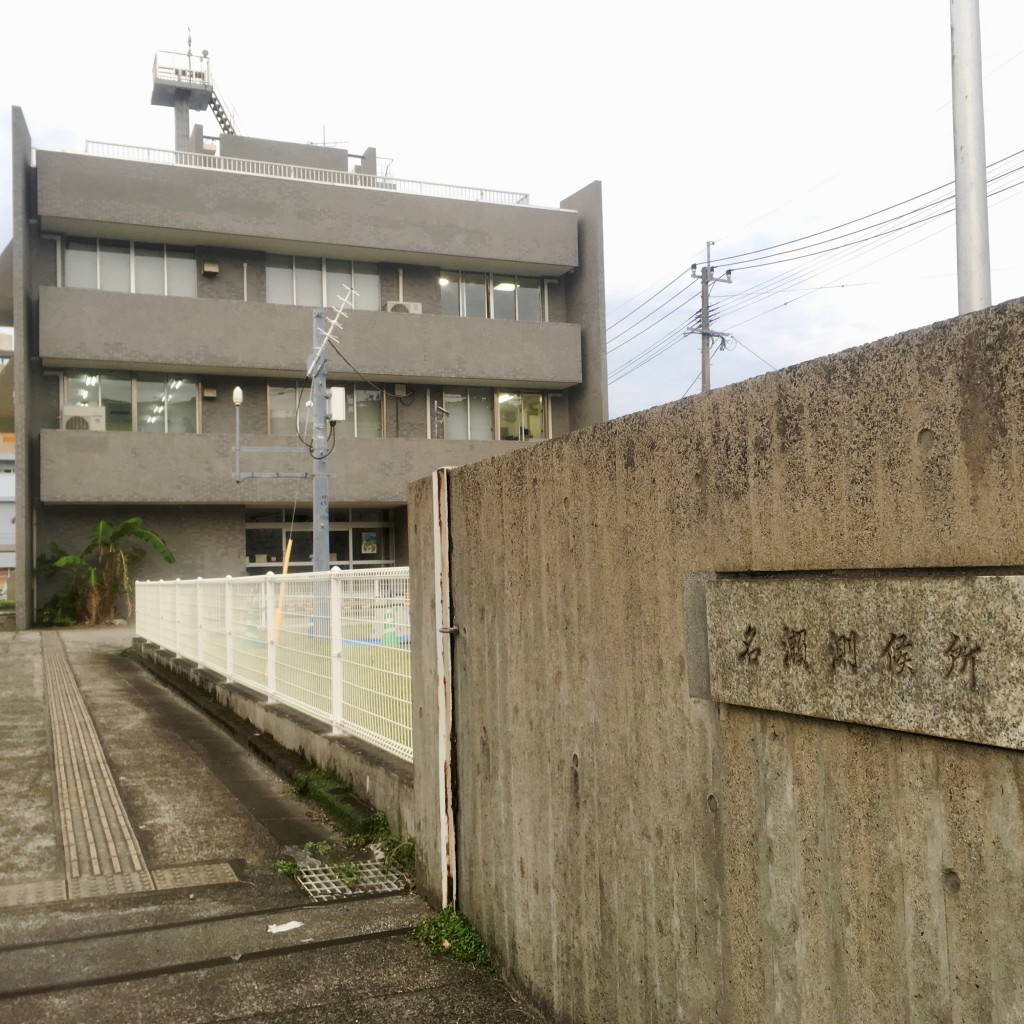 The weather measurement station is a part of the (Japanese) Meteorological Agency that issues weather observations, advisories, as well as warnings. 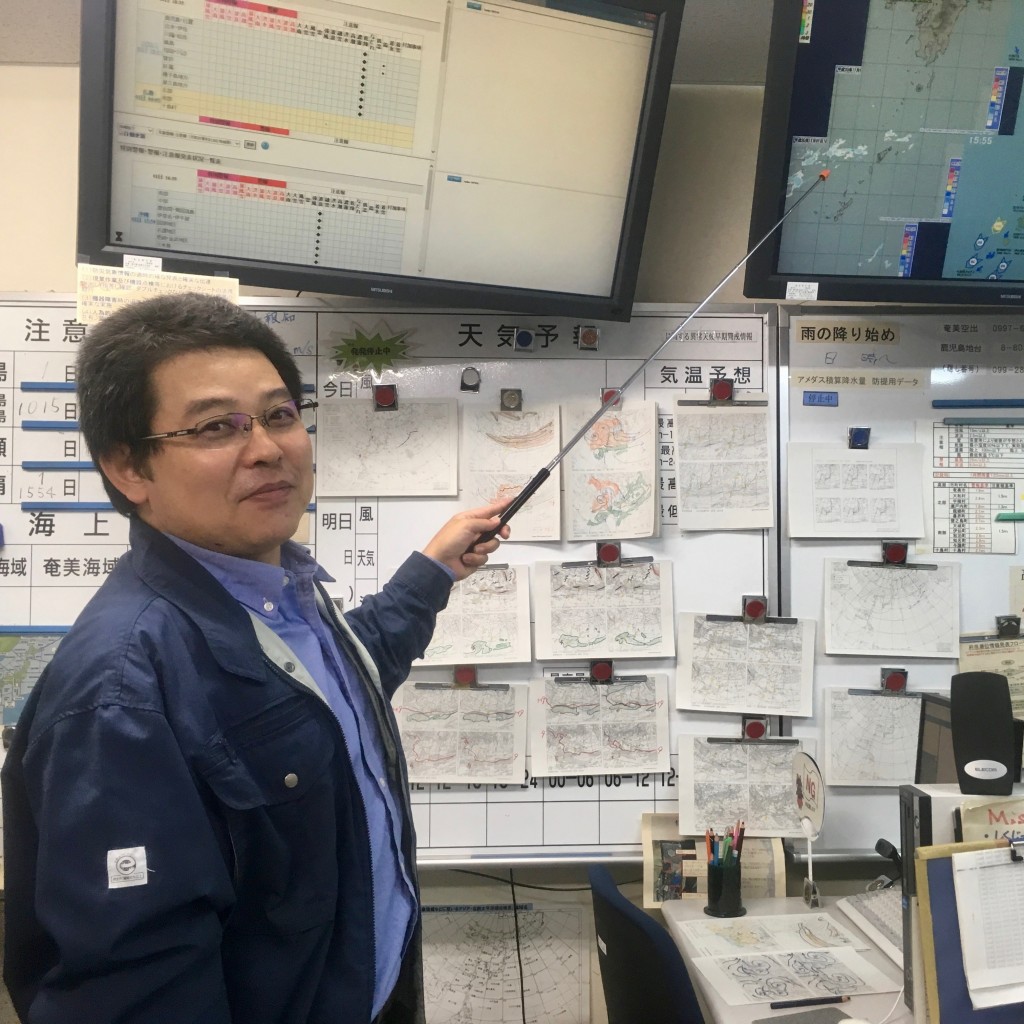 Q1: What exactly is a ‘subtropical oceanic climate?’

Subtropical areas are located from north latitude 20-30, or in between ‘tropical’ and ‘temperate’ zones.

It is defined by the following points, among others: 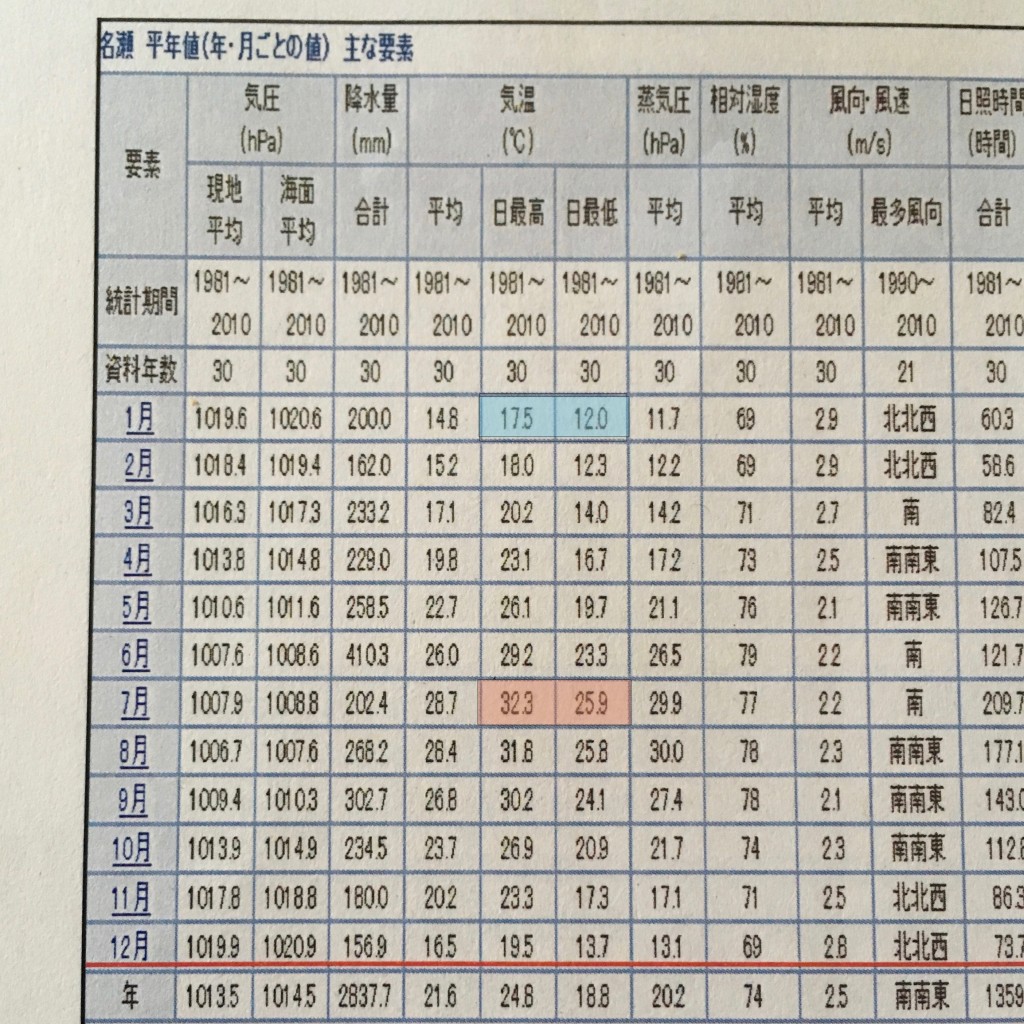 Winter is warm, and summer doesn’t get too hot… isn’t this an ideal climate?!

…which one might say, however, it does not mean everything is ideal. Let’s move on to the next question.

Q2: Is it true that hours of daylight is less on Amami, even by comparison nationally?

There is a rumor that hours of daylight is less on Amami, which has a ‘southern islands’ image and where the sunlight is stronger.

If you look at the yearly average daylight by region, the average being 1359 hours in Naze:

It seems that the daylight is in fact less when compared to other cities in Japan.

According to Mr. Sasaki, “[in winter] the winter pressure pattern forms, where cold air blows over the warm ocean water of the East China Sea, which creates low clouds. These low clouds are pushed over the Amami region by seasonal winds from the north, which obstructs the sunlight, making the daylight time shorter compared to other seasons. 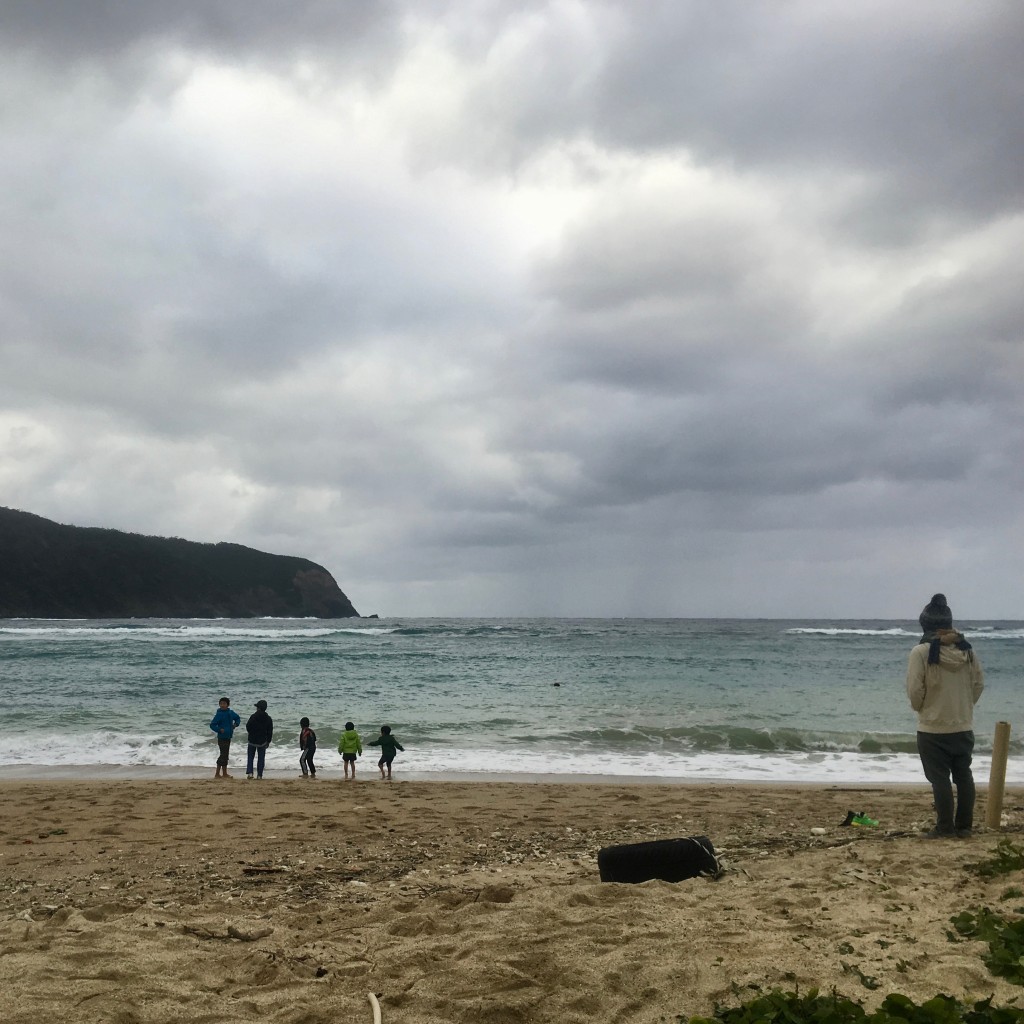 Dull skies such as this one become more frequent in the wintertime.

Q3: I’m sure the monsoon season is severe, but how is it compared to other regions?

There is definitely a large amount of precipitation, with June (in monsoon season) and September (typhoon season) having the most rainfall by far. In June, moist air from the south rolls in more easily, and it is more prone to stagnation at the end of the monsoon season, thus causing these high amounts of rainfall. The raindrops are apparently also twice the size of those in the mainland!

Okinawa is also technically a subtropical oceanic climate, but since the monsoon season is slightly shorter, there is little impact from weather fronts and typhoons, and there is less rain during winter, the average precipitation is less. 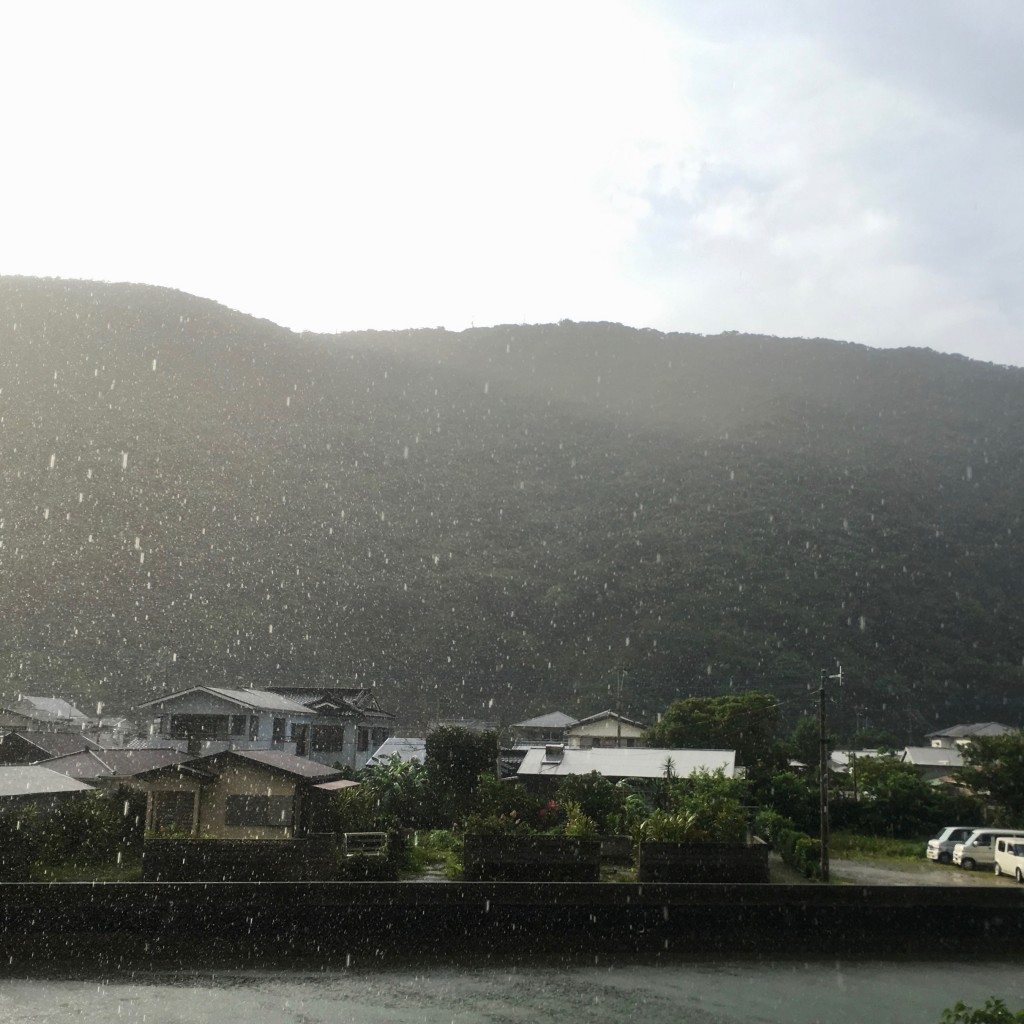 The rooftops make a drip drop sound when it rains.

The ocean becomes a source of supply and the air contains a high amount of water vapor, so the humidity level is 10% higher than in Tokyo or Osaka.

The ‘discomfort index’ that indicates humidity is derived from how high the temperature and moisture level is, so some may be left with a vivid impression from the hot and humid weather of the monsoon season.

Q4: If there are any weather circumstances specific to Amami, please let me know.

Since the epicenter of typhoons are clearly formed, when Amami enters the center, the weather suddenly clears up. By the time typhoons hit the mainland the epicenter has spread too wide so it often collapses.

There are definitely times during a typhoon when the wind suddenly stops, and if you go outside you can see the stars in the night sky.

I mentioned that it seems like there are more rainbows on Amami, and this was met with the answer: “that is due to the fact that sudden rain showers are common.”

I’m sure there are many people who have experienced a day when it seems sunny but then it suddenly begins to rain. At times like that, try looking around. There may be a beautiful rainbow by the mountains or over the ocean. 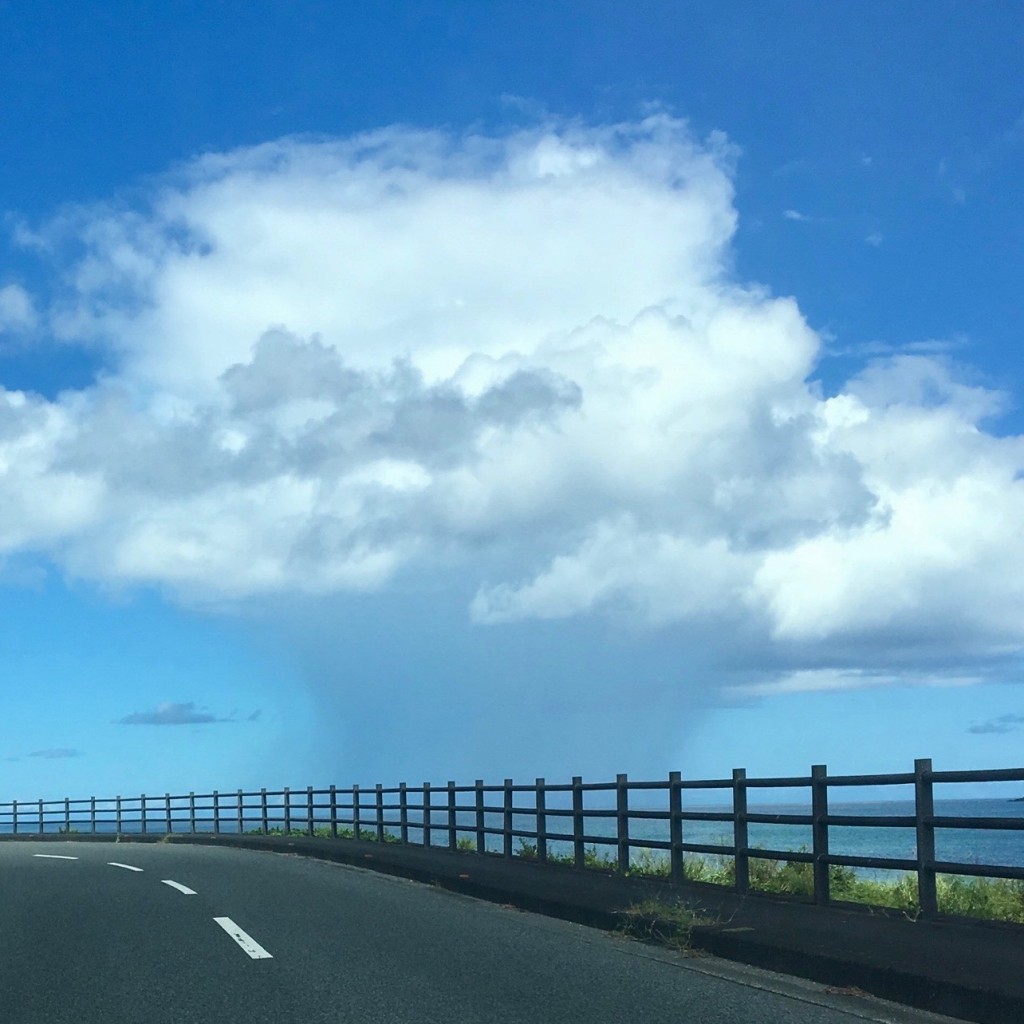 A curtain of rain approaches from across the ocean.

Q5: When do you think the best season to visit Amami is?

Mr. Sasaki thinks that the best time to visit Amami is during spring or autumn, when it is neither too hot, nor too cold. Although these are short periods of time, it is from March to April, as well as from October to November.

By the way, there are no Japanese cedar trees on Amami, so for those who get hay fever, it may be good to visit the island during the spring to relieve some of those symptoms. 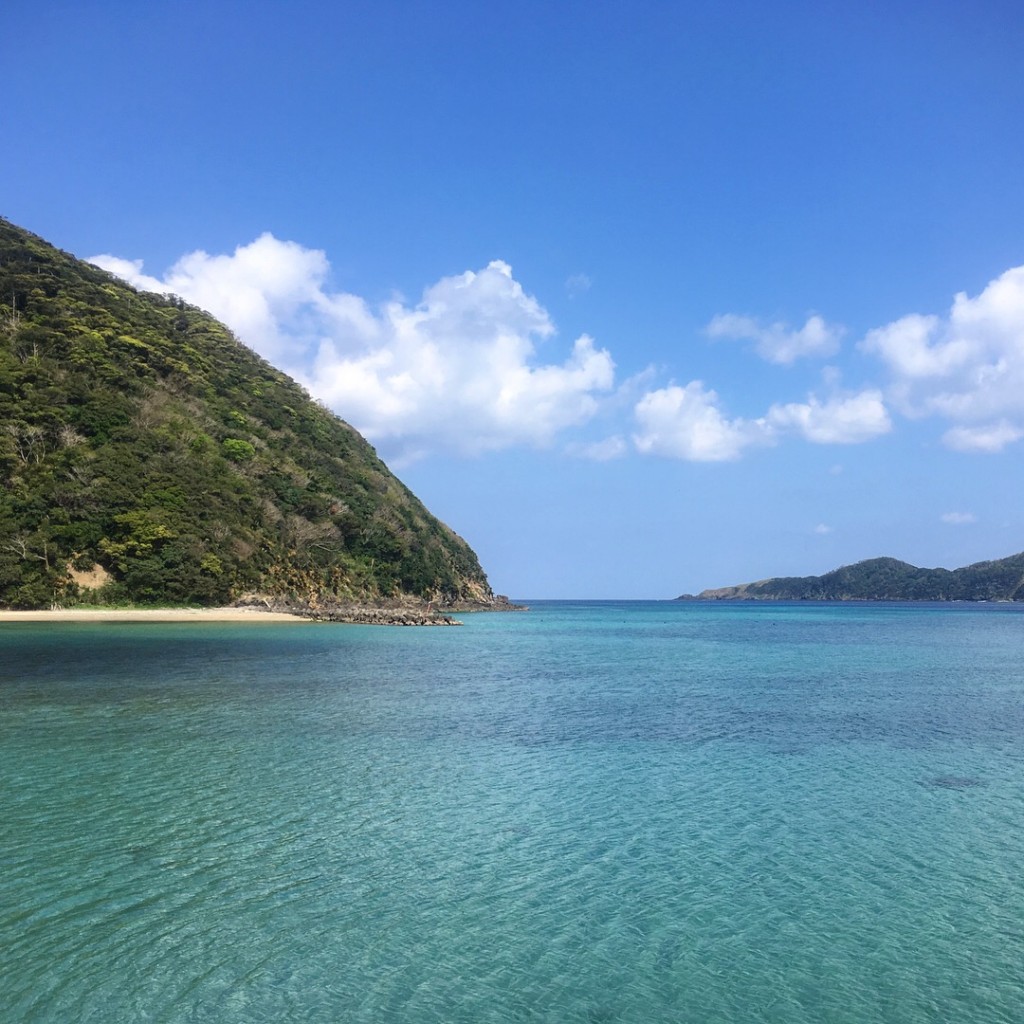 The young leaves are enchanting and the waves are gentle in March and April.

I hope this has helped make the weather of Amami more easily understood.

Each of the four seasons have good points, and there are various ways to enjoy them. I think that it is best for people to choose to visit during a season that best fits the purpose of their trip.

I was able to learn about the weather of Amami, and even about the ocean and wind surrounding the island. Many thanks to Mr. Sasaki of the Naze Weather Measurement Station. 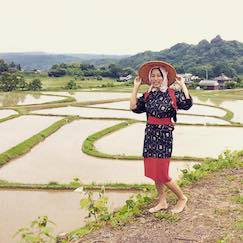